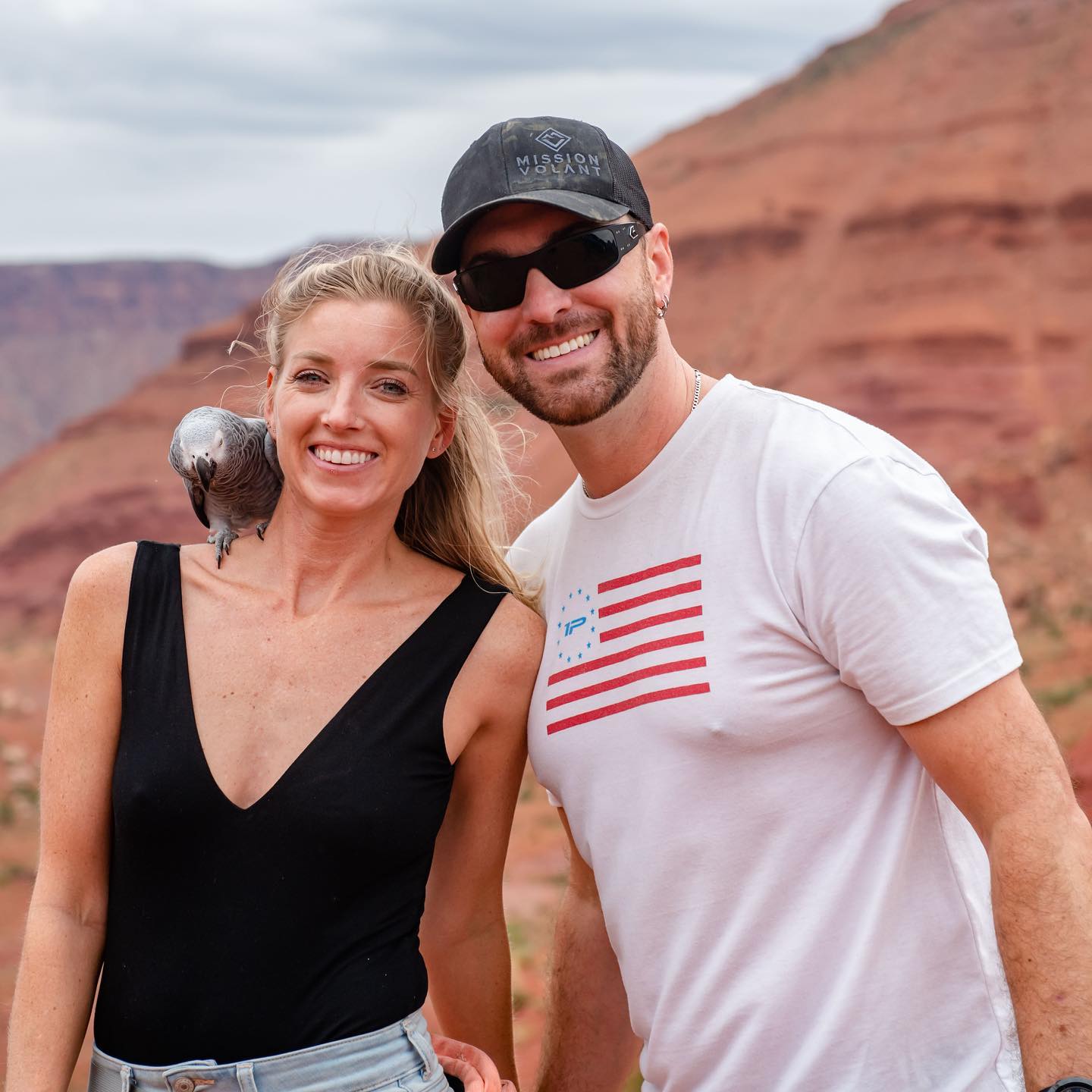 When someone asks what you do for a living, they typically are expecting an answer along the lines of lawyer, finance guru, teacher, or engineer. So to say people are a bit stunned when they hear our answer of “world-renowned parrot trainers and magician” is a little bit of an understatement, and our answer tends to lend itself to many follow up questions of how we got into this life. Here is a bit of our story…

Hi, my name’s Dave Womach, and together with my wife, Jamie Womach, we are the owners/founders of BirdTricks Inc., a parrot training company that focuses on teaching permission based training techniques in a way that applies to captive parrots. Our mission is to save parrots one person at a time by encouraging owners to provide safe yet stimulating environments for their flocks to thrive in. Unfortunately, birds are some of the most popular pets in the world, yet they are also some of the most misunderstood and rehomed animals as well. Our goal is to provide training, products, and resources to parrot owners all over the world that help them understand, and care for, their feathered friends in the best way possible.

At this point you might be wondering about the magician part of our answer to what we do for a living, and that is actually how it all began…

I, Dave Womach, am also known by another name – David Davinci, world-class Thrillusionist. Growing up, becoming an illusionist was my dream, and I invested countless hours over the years dedicating myself to my craft. My family also had parrots growing up, and I found ways to incorporate my love of magic with my love of birds, incorporating them into my shows whenever possible. After I met Jamie and we got married, we began to really focus in on the parrot training aspect, adding birds from our own flock into the acts, which really set ourselves apart on the global stage. We headlined on five Ringling Brothers & Barnum and Bailey Productions, headlined on Disney, Holland America, Princess and Norwegian Cruise lines all over the globe, and starred in & co-produced “Magical Flight” at the Hyatt Regency Saipan. It was also around this time that BirdTricks was born as we began realizing that the training techniques we used with our birds in our shows seemed like something we should share with the world.

However, while we started off BirdTricks in the hopes of helping other parrot owners while also running our magic business, we had no idea when we started just HOW much help the world really needed. Parrots are incredibly intelligent creatures, yet so many of them are bought strictly because of their bright colors, their cute vocalizations, or their exotic status, then they are stuck in cages and tucked away. Their wings, which are their main mode of transportation, are clipped, their cages are covered to keep them quiet even though they are vocal and social creatures, and their intelligence is ignored or even frowned upon as it can lend itself to mischief (especially when stuck in a too-small cage for incredibly long life spans with nothing to entertain themselves). It wasn’t long until we realized that the reason so many people treated their parrots this way was because the world just didn’t know any better – the mindset was “this is how it’s always been done, therefore it must be correct”. We felt we needed to get the word out to as many people as possible that there was a better way to own parrots that benefited not only the parrots, but the owners themselves. Our time between the magic business and the parrot business began to shift.

The first big issue we wanted to tackle, and are still tackling to this day, is diet. When most people think about what food parrots eat they think “seeds, nuts and fruit”. This could not be further from the truth. These foods, while they are eaten in the wild, are eaten by parrots who are having to forage for their food and fly dozens of miles a day to get it. Our parrots in captivity are sitting in confined areas with food given to them 24/7 – it is not the same. Feeding such high fat and high sugar diets leads to excess energy and hormonal surges, which typically involves screaming, biting, destruction of property, and other unwanted behaviors. This then leads to owners ignoring their parrots even further which only means the little energy they spent with their people is now cut off, and the excess energy and frustration grows. It creates a vicious cycle that, unfortunately, typically leads to a bird self-mutilating itself and/or being re-homed. Since birds tend to form attachments to their owners as if they were flock members, this creates more undue stress for parrots when they get passed from home to home, and the cycle of aggression and fear continues. We truly believe that 80% of all behavioral issues a parrot has can be fixed with a proper diet consisting of organic pellets (which we offer) as well as our Seasonal Feeding System recipes that we developed alongside an avian nutritionist and avian veterinarian. These food items saved our parrots’ lives, and over the years have saved the lives of thousands of other parrots around the world.

As a business, however, our greatest obstacle in getting the word out about the parrot diet (and parrot care in general) and how it needs to change is other international name brand businesses who are profiting off misinformation. Pellets that are filled with sugar, salt, soy, filler ingredients and harmful chemicals are a main staple in most homes because they are cheap to make and therefore cheap to push to the masses. Seed mixes full of things like sunflower seeds (extremely high in fat and a major cause of fatty liver disease in parrots) and shelled peanuts (which contain aflatoxins in the shells which are deadly to parrots) are spouted as being ideal and well-rounded parrot diets. People also have the belief that if their birds eat it and like it that it must be good for them, when what animal (or person) wouldn’t love being given treat food all the time? We, as a society, don’t say that just because dogs eat up their food that what they ate is good for them, so why has this become the belief about parrots? The answer – genius marketing by companies who only care about the bottom line, not about the health and safety of our pets.

It’s not just diet that we focus on though – we provide a wide array of products that we make or have vetted to meet our quality and safety standards. Toys, training stands, clickers, and aloe sprays are just a few of the offerings we have in addition to our collection of digital training programs. With everything we offer though, our greatest challenge is getting people to break away from the status quo of what they have been led to believe and work for something new. It’s not always easy, but when the owners put in the work and see the results, it is always worth it.

In recent years, BirdTricks has truly become our main focus with my magic touring taking a bit of a backseat (although I always love to perform!). While some of this was just a natural progression, a big part of it was our society beginning to change. People have begun waking up to the fact that corporations aren’t always out for their best interest, and that many ideals we used to hold need to evolve. With the advent of social media, this opened the door for individuals to have a real voice, and it’s those voices we are counting on to help us spread our message. Right now, we are still a small business, and it’s difficult for us to stand up to the resources and might of the corporations. But with the community of people we have built around us, our voice is no longer limited to just my wife and I. Around the world our message is growing, with thousands of people realizing there is a need for change in the way we care for our birds. It is those voices, those people, and those messages that will one day make the world listen and change the way we think about parrots.

One day, we hope that our answer to the question “what do you do for a living?” is not met with dropped jaws or questioning looks, but instead met with understanding and a desire to follow in our footsteps (even the magician part!). In the meantime, we will continue on as we have, building our community and spreading our message so that we truly can save parrots, one person at a time.