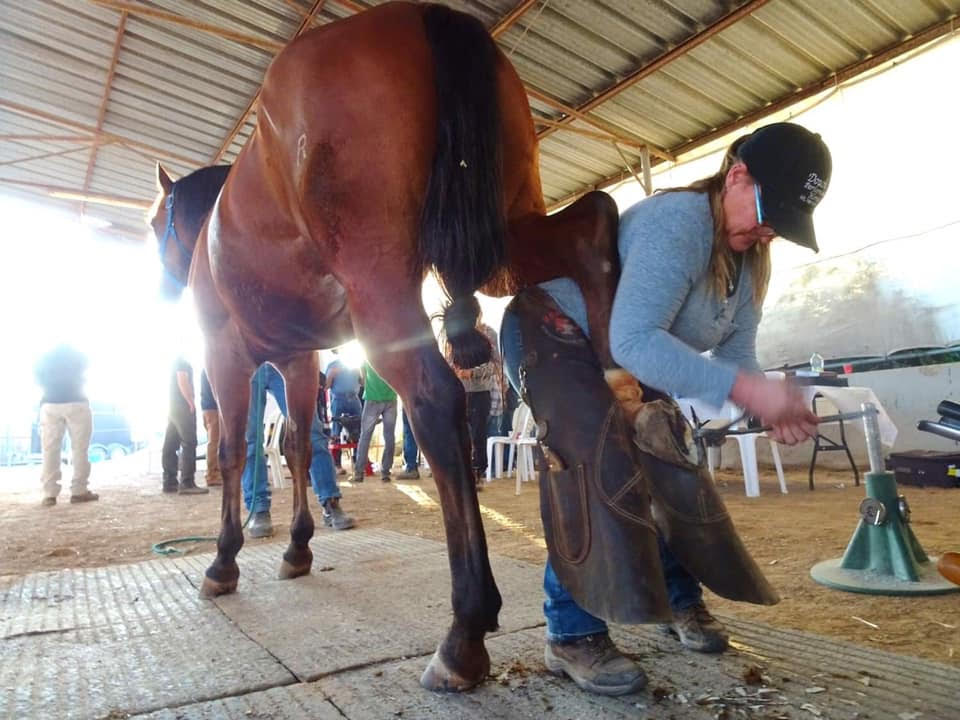 Heartland Horseshoeing School is the dream-turned-to-reality of Chris and Kelly Gregory.  It is now a family-run business that is thriving.  Their son, Cody, and his wife Kirsty, are both farriers that work at the school, shoeing horses and making farrier tools on the side.  Their daughter, Jacquelyn, and her husband Cameron are also both farriers that have a shoeing business, a farm-to-table meat business, and work at the school when needed.  Check out www.heartlandhorseshoeing.com to see the school, www.codygregoryllc.com, to see the tool company, and www.cjwpinoranch.net to see the finest in farm-to-table protein.

Chris started shoeing horses (called farriery) in 1987 when he was in college on a steer wrestling college rodeo scholarship.  He and Kelly met in college and married in 1988.  Throughout college, Chris built and maintained a good farrier business, and they graduated in 1991 with $12,000 cash and no debt.  A good sum for those days.

After completing his time in the Army, Chris and Kelly moved to the Denver, Colorado, area to start a farrier school for the Colorado School of Trades.  After running that school for three years, and the birth of their two children, Chris and Kelly decided to move to Missouri and start Heartland Horseshoeing School.  It officially started in April of 1995.

Kelly started shoeing horses with Chris as the kids became old enough that she could work.  Neither kid ever had a babysitter, so they had a front-row seat to watching their parents build a business and a school.  This meant many naps were on saddle blankets situated on hay bales and a lot of time was spent where the kids had to behave for the sake of safety.  But it made for strong adults with work ethics to match.

The first five years of starting a business like this were tough ones, but Chris and Kelly shod enough horses on the side to keep the school open.  Eventually, the school took off and they were able to prosper, build, and start changing the lives of their students as they came to the Heartland to learn this amazing trade.

Shoeing horses sounds like a lost art to many, but not if you have a horse.  Horses have feet that need care, and the better a person becomes at the farrier’s job, the better a life they can provide for the horse, which in turn leads to a better income for the farrier.  It is an extremely hard skill to learn.  Because of this, many people don’t make it from their inspired start to competent craftsmen.  The upside for those that do make it is that it is also a very lucrative profession.  Six figures are more common than not for anyone that has what it takes to become a self-employed farrier.

In the early years, they would buy equipment to match the students that signed up.  When eight students signed up, Chris and Kelly bought a few more stations and had eight forges and anvils for them to work on.  Eventually, the school grew to take 24 students at any given time, which is still the current maximum number.

Around 2004, Heartland started turning away dozens of students every year.  Chris wanted to hire instructors and build more shops, but Kelly put the whole thing to paper, and her insight kept them from getting bigger.  A truly inspired piece of the puzzle that created a fantastic lifestyle.  It also led to a business model that is the backbone of what they suggest to their students.  The gist of that model is to start the business with a desired annual income in mind, then work backward from that number to determine how many horses it would take to make that number.  For a farrier, it can look like this:

For the school, it became a certain number of students for a certain number of weeks to make the desired number.  At the end of the day, quality of life is not about the sheer income generated, but how that life is truly lived.  That is why being a farrier can be such an incredible trade.  It allows the tradesman a good enough living in the hours worked that they can have a great quality of lifestyle.

This was also a time when Heartland Horseshoeing School did not have any sort of social media presence.  By 2009, the classes were full, but there weren’t a bunch of extra students being turned away.  In 2010, there were empty spots that they couldn’t fill, so Chris started playing the social media game.  Until then, he thought this was in an internet-proof business as if such a thing existed.

Most people search for information through the internet, and Heartland Horseshoeing School had to start having a presence on the world wide web if they were going to continue to exist.  This was not an easy thing for Chris to start, but hunger is an incredible motivator.

YouTube, Facebook, and eventually Instagram.  They all became part of the language, and part of the job that Chris was doing in the early hours to keep the school open.  Nowadays, you can see what is happening to the Heartlanders that are going through school every day on Facebook and Instagram.  There has also been a series shot called Blacksmith Boot Camp, which is available on YouTube and is about the journey that the students take as they become farriers.  Here is a link to the season finale from 2021.  Heartland Horseshoeing School has over two hundred videos on YouTube and is adding more every day.

Besides teaching, Chris loves to write.  He wrote a textbook that was released in 2011, Gregory’s Textbook of Farriery, a 696-page, full-color textbook which has become the standard textbook in many farrier schools and has taught a huge number of people that want some information but cannot afford the time it takes to go to school.  It is also the only textbook of its kind that has also been translated into Spanish.  Chris has done a lot of clinics in Mexico and South America and is fluent in Spanish.  Having the textbook in Spanish has helped a lot of the farriers and horses in that world to have a better life.  One of his memoirs, For The Want Of A Nail, The Shoe Was Lost, just came out in 2022.  Both books can be found on Amazon, or on the school website at www.heartlandhorseshoeing.com.

Chris and Kelly have done a lot of traveling over the last few decades, teaching clinics and shoeing horses on six continents and most of the states in the US.  Since the school is only open for twenty-seven weeks a year, (see business model), it allows for time to do other things besides just the one main job that makes a living.  In their off time, they take care of their farm, shoe their personal clientele of horses, do a little bit of traveling, and watch their grandkids grow.

The main challenge that Heartland Horseshoeing School faces in the modern era is that the classes fill up so early, and many quality people must be turned away.  It would be nice to teach everyone that wants to become a Heartlander, but the fact is, you just can’t provide the same experience and product to everyone if you take everyone.  They take solace in the thought that the folks that are meant to come to the Heartland will end up coming to the Heartland.

Latest posts by Barbara Santini (see all)
Post tags:
Heartland Horseshoeing School is the dream-turned-to-reality of Chris and Kelly Gregory