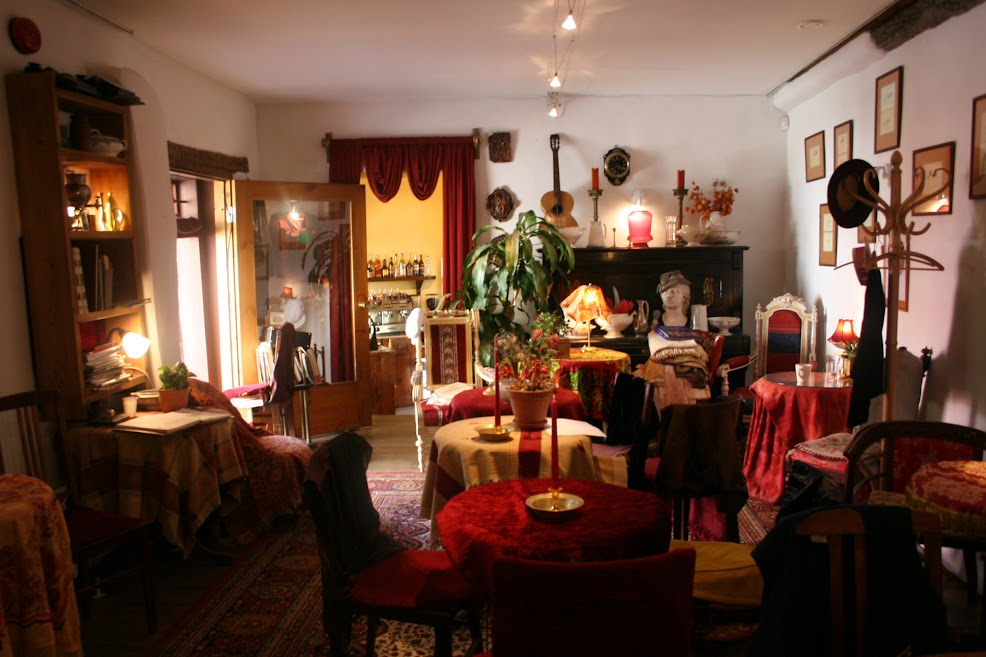 I had a dream…

In the heart of Tallinn’s historical Old City, only 100 meters from the Town Hall Square, could be found Vene Street 6. This historic property’s courtyard had seen much prouder days: some structures were about to collapse and others stood empty; some had been relegated to wood sheds since the few remaining apartments had only cold water and wood-burning ovens. The year 2000 had not arrived there – yet.

Although the first written mention of this property was in 1371, much of the courtyard and its enclosing buildings date from the 13th century. While subsequent centuries witnessed the whims of architectural fashion and/or the needs of owners, many vestiges of the Middle Ages are omnipresent. There are arched dungeons and cellars, circular-tower staircases, chiseled stone window frames, massive beamed ceilings and much more. The more famous (or infamous) residents of the courtyard dwellings include: the Burgermeister Rotgherus de Lapide, Mayor Conradus Kegheler, goldsmith Herman van Corne, Blackheads Brotherhood member Hans Luhr, the renowned Nottbeck family, Mayor August Reinhard Koets and Baron Victor Maydell.

From seeing and knowing all of the above, the idea of a bonafide Masters’ Courtyard was born.

This Masters’ Courtyard (“Meistrite Hoov”) project originated in 1993. My concept was to renovate the deteriorating property at Vene Street 6 and to create a center for master artists and craftspersons in the tradition of the Hansa League cities. A same named non-profit organization (Mittetulundusühing “Meistrite Hoov”) was established to make this project a reality. I had the background to realize this idea, as all my life I had been exposed to art and handicraft. My mother was a teacher of handicraft for more than thirty-five years and I am a graduate of the Art Academy of Estonia in architecture (1976) and jewelry design (1982).

Upon completion, the enchanting Master’s Courtyard had to include several self-contained workshop environments where local and visiting master artists and craftspersons could safely and peacefully work in the open and to which all Courtyard visitors would have free access. In addition, I wanted to have several exhibition halls, a coffee shop, art and craft shops, along with overnight or long term accommodations. I wanted deliberate attention paid to the needs of physically challenged visitors, for whom sloped pathways (where they are available) would provide easy access to the workshops, galleries and café.

For six years, I had to fight with city government and various “political” decisions until, in 1999, I signed a long-term contract to rent all eight buildings in the courtyard for a period of sixty years with the responsibility to

restore and rebuild the severely deteriorating property through my own means. It was a large risk and nobody believed I could do it, including, at times, even myself. Initially, some of my friends joined the project, but left the non-profit organization very quickly for that reason.

We started in 2000. Well-known architects, who had already renovated several houses in the Old Town, turned my sketches into a professional project. There were, of course, special rules to abide by, as the Old Town is under the protection of UNESCO and we had to preserve all the historical buildings. I also had to find the financing for the project. I invested all of my savings, my mother moved into my home and we sold her private house. I was unable to take any loans from the banks, as all the property belongs to the city and, therefore, could not be included in the loan contract as a guarantee. However, several companies and many friends gave me both support and private loans with a low interest rate. I was able to collect enough money to start the renovation work and, step by step, we moved forward. Broad democracy would not work for this project. If many people try to decide something together, it usually takes much more time and, very often, nothing happens. It is always better to have one person who is responsible for everything, including the result. I decided to make the choices, select the artists and people would see in the future our friendly “family”.

The first handicraft shops and art gallery were opened in the autumn of 2001 and the next spring our famous café opened, as well as four apartments for visitors, which were built upstairs. These skylighted apartments were named Villa Hortensia. For the first time, I began to receive some income from the Masters’ Courtyard. We completed our renovation work in 2012. Now, ten different art and craft studio-galleries, an exhibition hall, a café- chocolaterie and six small guest apartments can be found. I am one of these artists, having a gallery of unique jewelry pieces. In the absence of visiting artists, accommodation is made available to tourists. The revenue from the renting of these accommodations and the exhibition hall is intended to offset our expenses. The Masters’ Courtyard has become an artisans’ quarter, where Estonian artists and craftspersons ply and preserve historical artisanal traditions and techniques, teach apprentices and produce their own works. Residents and visitors alike may come to observe master artisans, to enjoy the galleries and to savor a variety of excellent coffees – all this taking place in one of the most attractive courtyards in the City.

In creating and investing in this courtyard, I was never dreaming about large financial rewards. For me, it was a mission to save one small place for Estonian artists and craftspersons, to have shops for tourists without Russian matryoshkas and Kaliningrad amber, to help preserve and develop Tallinn’s Hansa City arts and crafts traditions and to recreate a romantic artists’ courtyard atmosphere in the historic Old City. One result has been that several movies and many advertisements have been made in our venue and Villa Hortensia is recommended by Lonely Planet and several other travel

guides. For this creation, I became “The Best Tourism Promoter of Estonia” in 2009 and in 2014 I received the name of the “Honour Citizen of Tallinn”. It was not my aim to get all of these mentions, but it is quite nice to feel that I have made something very important for my home city.

It has taken almost thirty years of my life, but I have not been totally alone. For all of these years, my wife, who is a professional, has taken care of our book-keeping and now my daughter helps to manage the visitors’ apartments. I do not think that I will get my money back during my lifetime, but I am hopeful that my children will continue my work. So, I can tell you that if you have a dream and work hard, it can become true – and the best “income” is to see happy, smiling people coming to our courtyard.

Chairman of the Board

previous post
Maira Salman, founder and partner at “Whatsthe-trend.com” – what’s trending,  and what’s hot in healthcare and fitness routine
next post
Growth Hackers with one mission only: business growth and success – Jonathan Aufray