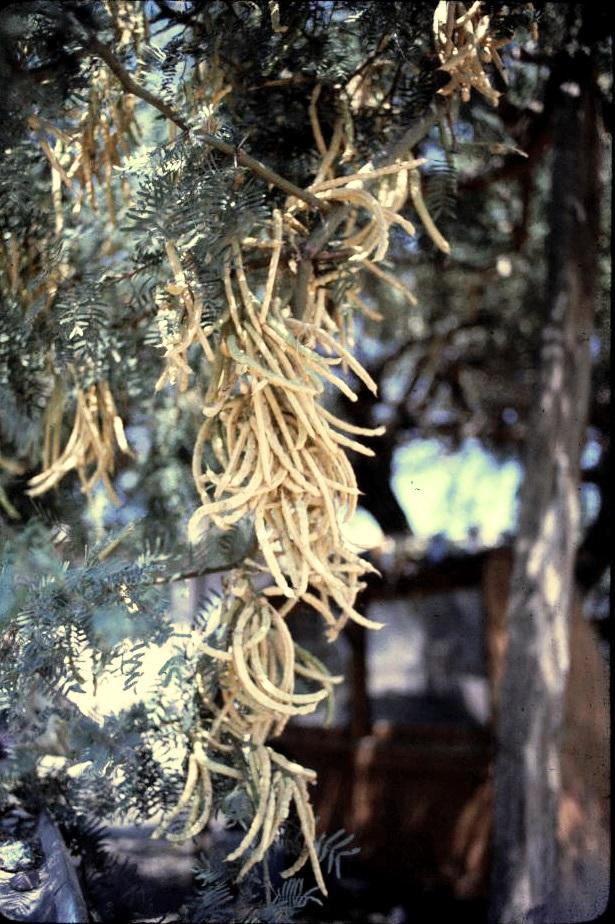 Mesquite bean flour concentrate- a lovely tasting food whose tree thrives in the world’s hottest environments, provides economic benefit for the very poor, enriches the soil with nitrogen and is a marvelous sequesterer of carbon.

As Charles Perry of the Los Angeles Times, 2008, noted “It had a beautiful aroma. There was something roasted, like coffee or chocolate, then a stronger smell suggesting some fruit (perhaps dried cherries — or was that coconut?) together with a note of spice: cinnamon, maybe nutmeg. The mystery substance was mesquite flour — the sweet, finely ground seed pods of the same mesquite tree we have to thank for hot-burning mesquite charcoal”

The sugary sweet pods of mesquite were a major food source for indigenous Cahuilla, Shoshone and Chemehuevi people in the California Mojave Desert including Death Valley the hottest place on earth before the arrival of Europeans. Mesquite was also important for building materials, firewood, shade and food for humans and animals in the dry coastal deserts of the western Hemisphere from Mexico, Ecuador, Peru, Chile, Bolivia, and Argentina where there are more species of mesquite than any other place in the world. The people in the cities and towns of Argentina call their varieties of mesquite, algarrobo (which is the what the Conquistadores called it as it reminded them of Carob in Spain and the Mediterranean). In the remoted rural areas where there are many kinds of useful trees, the rural people simply call it “El Arbol” or “The Tree” due to the importance for shade for the homes, wonderfully tasting pods for humans and livestock, firewood, very stable wood for furniture and building materials and the grass grows more luxuriantly under the canopy due to mesquites nitrogen fixation.  But “El Arbol” was not original with rural folk or “gente del campo” but from indigenous people that referred to the mesquites as “Tacko” in their Quechua language meaning “The Tree.” As the glaciers in Argentina did not cover most of the continent, unlike North America the Argentine native people’s customs were not disturbed in the “ice age” and Archaeologists have found evidence of uses of mesquite as far back as 10,000 years before present.

Today in almost all the worlds semi-arid areas that cover 25% of the earth’s surface from America, South America, Africa, the Middle East, and India/Pakistan at least one of the 45 species of mesquite (technically the genus Prosopis) occur. Livestock eagerly seek and devour the sugary pods. When the seeds pass through the animals their germination rates increase and as these seeds are disseminated and germinate over very large areas and become covered with these mesquites. Unfortunately, unlike erect, sweet podded thornless mesquites in Argentina and Peru, the large areas covered by mesquites in Africa and southwestern United States are of a multi stemmed spiny type that prevents the trees from being eaten and they form dense impenetrable stands. Mesquites are especially successful in colonizing vast areas due mesquite’s ability to convert nitrogen in the air into a form of nitrogen essential to making proteins and the very low annual amounts of nitrogen yearly occur in rainfall and the grazing livestock that consume the nitrogen in the form of proteins. Scientists have developed single stemmed, erect types with sweet pods but due to the bad experience with the spiny, genetically unimproved types, landowners in the USA and Africa are resistant to try the improved varieties. These new varieties would also be very beneficial in enriching the soils with nitrogen and organic matter and increasing livestock carrying capacity.

Perhaps the greatest crisis facing the earth is global warming and, in this regard, Mesquite has special attributes that makes it very helpful in combatting global warming.  If you drive through midwestern USA in the spring of the year you will see very dark soils with no stones, all ridged up and ready for planting. If you drive through west Texas or southern Arizona you will see dry sandy soil with stones, rocks, and no black organic material on top of the soil. Due to high temperatures and little plant growth, the arid soils have ten times less carbon than midwestern soils. In order to feed the bacteria that make the soil organic matter and carbon, they need nitrogen. The mesquites that cover seventy million acres in southwestern USA are legumes with little balls on their roots called nodules that take nitrogen out of the air and convert it into ammonia and then protein for the plant to use. Now the important part for carbon sequestration, when the plant converts the nitrogen in the air for the plant to use, the plant must provide simple organic acids made of carbon to accept that nitrogen. In a plant for every nitrogen that it converts from nitrogen in the air into plant protein it must also take at least 12 times as much carbon. So, when mesquites are growing on very poor soils and make nitrogen, they are also taking up large amounts of carbon too. While the amount of carbon taken up by an acre of mesquite is modest, when you consider that 25% of the earth’s surface has mesquite or is adaptable to mesquite, the total amount of carbon sequestered is significant globally.

As a company Casa de Mesquite’s production facility has significant advantages in being located in a region in northwestern Argentina that has been using mesquite pods for human food for about 10,000 years and slowly over the centuries have selected mesquite trees with very lovely tasting pods. Like all arid lands that do not have oil for revenue, the people in Argentina’s extensive semi-arid lands are poor. These people greatly appreciate Mesquite trees and are eager to harvest pods from their trees to sell to Casa de Mesquite to produce mesquite flour. In 2021 Casa de Mesquite purchased twenty-three tons of pods in less than 4 weeks from only two suppliers. There are tens of thousands of acres of mesquite trees available to supply pods, so supply is not an issue.

Undoubtedly the most nutritionally important aspect of mesquite flour is its rich suite of   free polyphenols and bound polyphenols which range from about 198–350 mg gallic acid equivalents /100 g flour) and 320-1700 mg gallic acid equivalents/100 g flour, respectively. These polyphenols are strong antioxidant, anti-inflammatory with positive health effects such as anti-carcinogenic, neuro-protective, and beneficial cardiovascular effects. The protein content of approximately 11% is greater than many cereal grains and the high fiber content of 25% is particularly important.

Perhaps mesquite’s most interesting culinary application is in uses with chocolate. Various bakers are using equal quantities of chocolate and mesquite in products as diverse as gluten free cookies to flourless chocolate cakes. With less flavorful products such as cake and cookie fillings, blending in mesquite flour until a light tan color is obtained, provides a flavor similar cinnamon/cacao but softer, smoother, and lighter. Then too use of mesquite in waffles, morning coffee, and sprinkled on morning breakfast granola a fantastic way to start the day.

In today's world, people's eating and exercise patterns have changed, and it is often lifestyle that is the cause of many diet-related illnesses. I believe that each of us is unique – what works for one does not help another. What is more, it can even be harmful. I am interested in food psychology, which studies a person's relationship with their body and food, explains our choices and desires for specific products, the difficulty of maintaining optimal body weight, as well as the influence of various internal and external factors on appetite. I'm also an avid vintage car collector, and currently, I'm working on my 1993 W124 Mercedes. You may have stumbled upon articles I have been featured in, for example, in Cosmopolitan, Elle, Grazia, Women's Health, The Guardian, and others.

previous post
The Brolo – Two Brothers combining the classic style of Bolo Ties with the functionality of Eyewear Retainers
next post
Jose Torres of Prycity.com me create an online drop shipping