TURNING BACK THE CLOCK ON AGING 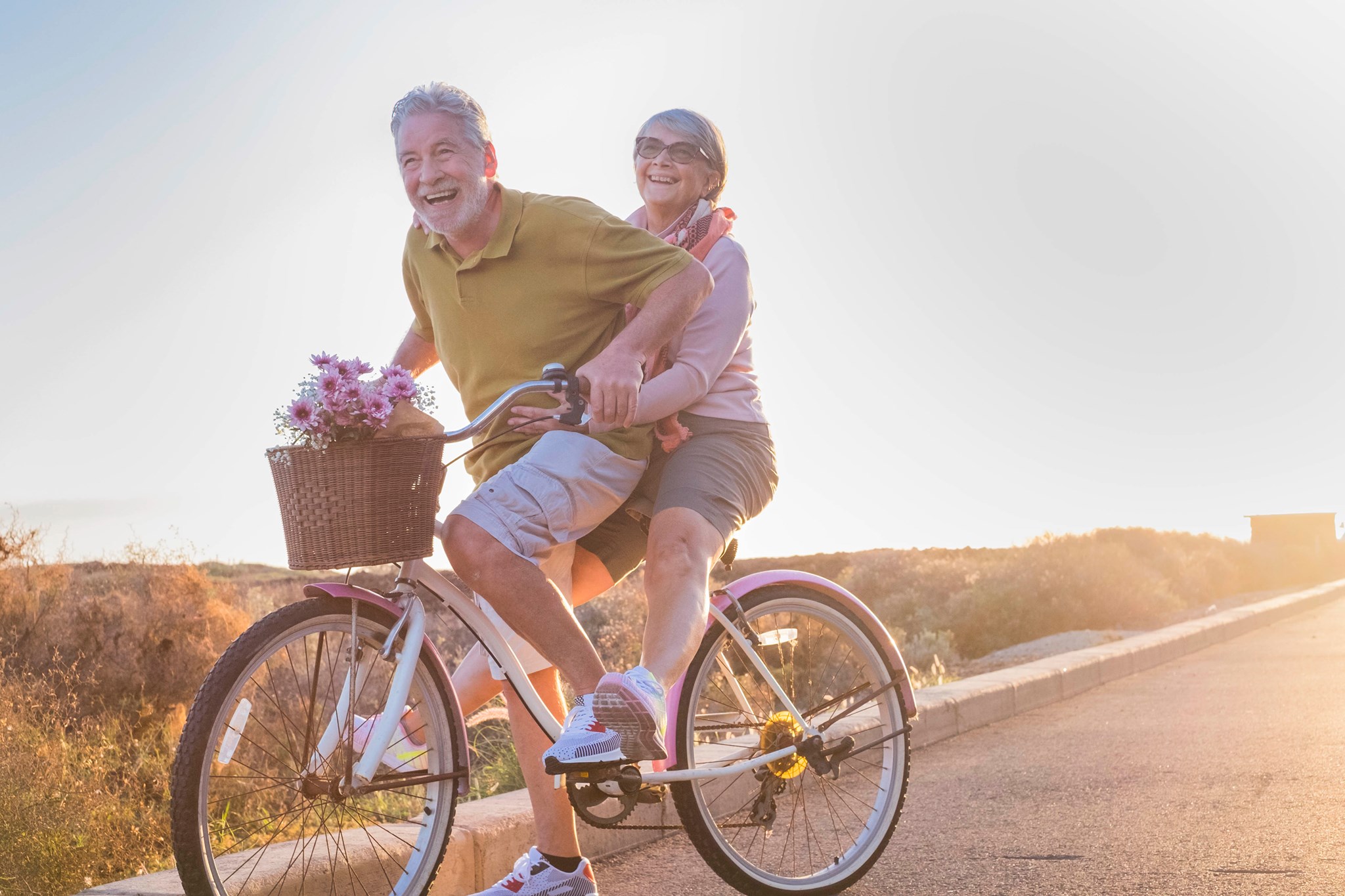 A Profile on Barry Russell

Barry Russell, the founder, and CEO of PRMEDICA in Los Cabos, Mexico, is  walking, breathing proof that his regenerative medicine clinic is worth a  visit. At 82 years of age, Barry works 80+ hours a week at his medical  clinic and still finds time to exercise frequently on his carbon fiber road

bike and in his surf kayak. As a result, Barry has more energy and stamina than  most people decades younger. Besides an excellent exercise program and diet,  Barry does many of his medical clinic therapies such as stem cells, exosomes,  telomerase activators, NAD+ IVs, and other Bio cellular Regeneration techniques to  turn back the clock on aging. He looks great, too, but he has not told me about  using any of his clinic’s skin rejuvenation technologies. I am guessing no. Barry is  more interested in maintaining his ability to stay on his beautiful bike and ride the  waves at his favorite surfing spot. As part of his fitness program, Barry has  registered and is currently training for the 2022 IRONMAN 70.3 LOS CABOS held  on 6th November 2022.

Barry was born in 1940 in England. He attended

university to become a chemist after discovering how

much he enjoyed exploding stuff in the garage while

still a mischievous teen. In 1958 he developed an

effective drug for the Asian Flu pandemic, which he

sold to major pharmacies throughout the country.

Barry did very well with this discovery. Unfortunately,

a vaccine for the Asian flu ended the demand for his

profitable drug. Forced by circumstances and

pharmaceutical drugs, which he manufactured and

distributed in countries all over Europe and SE Asia,

a successful waterfront real estate development of 90 luxury villas, a casino, a  nightclub, sports bars, and restaurants. In addition, he developed various other  projects he deemed would be a good investment that helped him and other  entrepreneurial spirits who asked for investment capital to fund their businesses.  Barry envisioned that Los Cabos would one day become a major tourist destination  and wanted to be part of this exciting growth. There were many challenges along  the way, but the knowledge and foresight Barry gained from more than 30 years  of international business experience helped him succeed.

Fully licensed casinos were banned in Mexico since 1947, and only betting on  sports events, horses, and dogs was allowed. Barry created Caliente Casino and  operated table games such as blackjack, roulette, Texas Hold’em poker, craps, and  slot machines. He had no problems with the State authorities but was closed by the  Federal Government. After lengthy court hearings, the case was resolved, and Barry  could open again and operate the card games and slot machines. Playwin Casino  now operates from this location.

However, the business which caused the most controversy was the Baja Money  Exchanges. Over several years, Barry opened 18 money exchanges in Los Cabos  and La Paz to satisfy the growing number of tourists who wanted to buy pesos  when vacationing in Los Cabos. The exchanges were open seven days a week, 12

hours a day, giving customers very favorable exchange rates and doing a thriving  business. However, the local banks were not pleased with the growing popularity of  the money exchanges. The exchange rates at the banks were not competitive, and  they were not open at convenient times for tourists. In addition, more and more  people were using the services of exchange houses. As a result, the banks were  reluctant to provide complete services to Barry’s exchanges, and it wasn’t easy for  him to get sufficient pesos daily from the banks to expand the business.

Barry then came up with a plan that would change everything. He decided to print  his own pesos and called the notes Baja Travelers Pesos. The clients had a choice of  purchasing the official Mexican pesos at the regular rate or the Travelers pesos at a  better rate. More than 350 merchants in Los Cabos accepted the Travelers pesos to

purchase merchandise at their stores. The merchants would later visit the exchange  houses to change the Travelers pesos for dollars at competitive rates. This was the  best method for the exchanges to dispose of their daily dollars without going to the  banks. Everything went well until

some weeks later, the Travelers

pesos were featured on the 60

that the Federal Government had

a competitor in Los Cabos

printing their own currency.

However, after reviewing the notes, the Federal authorities requested that the logo  of the Chamber of Commerce should be removed, and the exchanges continued  using the Travelers pesos.

Eventually, the problem with obtaining daily dollars from the banks was resolved,  and the Travelers pesos were discontinued. In 2012 Barry sold his many projects in  Los Cabos to focus on returning to the healthcare business he had previously so  much enjoyed.

PRMEDICA, a medical clinic and spa, is his latest visionary thinking which he  established about ten years ago in Los Cabos. The latest in biotech is the stem cells  and the extra-vesicular exosomes that help the body regenerate and repair  damaged tissue. In particular, Mesenchymal Stem Cells, often called “adult” stem  cells, and exosomes are poised to become the next great advance in relieving  human suffering from aging and reducing many painful conditions and the “killers  of aging” such as Diabetes, Heart Disease, Cancer and Alzheimer’s.

Stem cells and exosomes can repair damage to intervertebral discs, tendons,  ligaments, and internal organs. Unfortunately, they have yet to be embraced by the  FDA in the US. However, as Big Pharma companies see the demand for stem cells  and exosomes and expand their investment in these new bio-technologies, we are  likely to see more cooperation from the powers that be. Currently, sick people are  more profitable than healthy ones. However, as the population ages and “sick-care”  becomes unsustainable, stem cells and other new technology will become more  widely available. The good news, Barry’s partners in the US have recently  announced receipt of FDA authorization and clearance to enroll patients in its phase  1 & 11a controlled study of the safety and efficacy of therapeutic treatment with  mesenchymal stem cells in adults with COVID-19 complications.

Barry has assembled a medical team at PRMEDICA that has been carefully selected  to meet the highest personal and professional standards. The clinic and medical spa  are fully licensed, specializing in advanced Regenerative Medicine, and accredited  by the Federal Health Authorities in Mexico (COFEPRIS) and other authorities.

For now, I strongly suggest hopping on an airplane and visiting Barry’s clinic in Los  Cabos, which has quickly become one of Mexico’s most popular medical tourism  destinations. At PRMEDICA, you will find a host of therapies for looking and feeling  younger. Just some of these include:

2. Musculoskeletal disorders affecting the muscles, ligaments, and tendons. 3. Treatment for neurological disorders such as Alzheimer’s and Parkinson’s  diseases.

13. IV vitamin therapies and cocktails include the Dr. Myers infusion, detox,  chelation therapy to remove heavy metals and toxins from the blood, and ozone  therapy.

PRMEDICA has developed advanced protocols using stem cells and exosomes to  help reverse the aging process and extend one’s health and life span by 20 years  and beyond. The Science behind these bio-technologies is compelling. In 2020,  genetic scientists from around the world presented a “Unified Theory” of aging.  Before 2020, there were different “camps” of scientists who disagreed on what  causes aging.

Some scientific camps believed it was telomere attrition. Telomeres are like the  plastic end of a shoestring that holds everything together and keeps it from  unraveling. Every time a cell divides, the telomere (the end of the shoestring) gets a  bit shorter. The Hayflick limit states that cells can only divide so many times before  they “unravel,” leading to cell death and often leaving a senescent cell behind.  “Zombie” cells cause havoc in our bodies by spewing off free radicals leading to  many unwanted effects; most notably, cellular senescence is believed to be a  leading cause of Alzheimer’s, one of the most feared of the 4 “Killers of Aging’.

Other camps believed genetic mutations and genomic instability were the primary  cause of aging. Genetic mutations can be caused by sun and X-rays. Genetic  mutations were thought to be the leading cause of another of the most dreaded  killers of aging, Cancer. Other camps believed mitochondrial dysfunction interfered  with ATP production of energy in the cell. Still, others thought that Stem Cell  Exhaustion was the culprit.

What the Unified Theory of aging says is that everyone was right. Except all of  these “causes” were symptoms of Epigenetic Alterations. The discovery of the  Epigenome changed everything. Epi means “above.” So, while our genes play a  significant role in how we age, there is a “master switch” known as the Epigenome.  If this master switch can be kept healthy, all the other causes of aging would be  positively affected. Epigenetic alterations are the upstream cause of the hallmarks of  aging. And as it turns out, this is the only cause of aging we can completely  reverse!

In 2016, Japanese geneticist Dr. Yamanaka won the Nobel Prize for Science by  reversing the biological age of rats, the equivalent of 5 human years. Tests are being  carried out on humans, and the results are promising.

In any event, we all want to live healthier and independently for as long as we can.  As a result, we are getting closer to dramatically extending our health span, where  100 is the new 60. For more information on the longevity programs available at  PRMEDICA, please https://prmedica-inc.com/blogs/news/how-to-live-to-be-100-years Or visit PRMEDICA`s stand at the World  Congress in Anti-Aging Medicine at the A4M Longevity Fest 2022 in Las Vegas from  December 9th to the 11th.

In addition to the Anti-Aging treatments, PRMEDICA is a recognized leader in  Biocellular therapies and offers the latest advances in treatments for various  orthopedic and musculoskeletal disorders affecting the muscles, ligaments, tendons,  and joints. Their new generation therapies have successfully treated degenerative  joint diseases, particularly knees, shoulders, hips, back, hands, and feet; neurological  disorders, rheumatoid arthritis; and many other conditions, including the treatment  of COVID-19-related complications.

Check their menu of services at www.prmedica-inc.com.

I am deeply convinced that each patient needs a unique, individual approach. Therefore, I use different psychotherapy methods in my work. During my studies, I discovered an in-depth interest in people as a whole and the belief in the inseparability of mind and body, and the importance of emotional health in physical health. In my spare time, I enjoy reading (a big fan of thrillers) and going on hikes.

Latest posts by Julia Davis (see all)
Post tags:
TURNING BACK THE CLOCK ON AGING