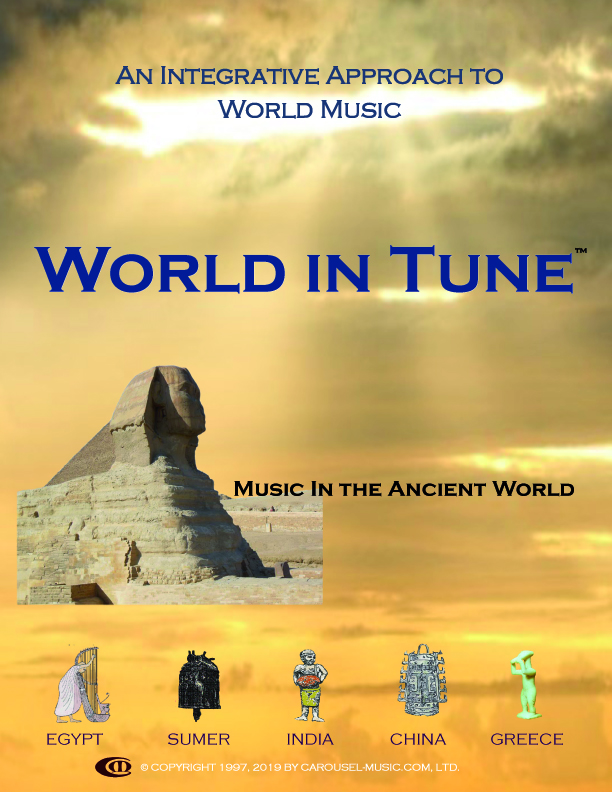 My motivation in starting “World In Tune” was my wish to give kids more creative outlets, a more holistic, integrative approach to their studies and, hopefully, keener powers of observation. I could do  this with my music publishing company. Kids are touched by music – they like it – like to listen to it  and to move to it.

I felt badly when I heard how excited kids were to have a “play date”. PLAY – that was something that happened everyday after school – there was no arranging a time and place for it. That’s where the roots  of creativity, social actions with others and physical activity are tapped.

This is how “World in Tune” came into being. You might say it’s a playful mix of many subjects: Language, Math, History, Art with Music as the core. It takes kids on a journey back 5000 years when there was a real change in peoples’ lives (a seismic change similar to what the computer has done  today).

The big change back then was agriculture. To farm the land you needed to understand the seasons: you had to know when the rainy seasons would come – you needed some sort of time keeping and there it  was right over your head – you had to study the stars (Astronomy and Mathematics). You had to build

ways of getting crops watered – irrigation canals, water wheels, etc. You had to know how to store food that was grown and what to do with surpluses. People joined in a collective life in a fixed location, and  with laws and rituals governing this collective life great civilizations were born.

China, India, Sumer/Babylon, Egypt and Greece: these are the five civilizations which “World In Tune” visits. And while visiting the past you find out what was fun back then – how people entertained themselves – singing or dancing or creating beautiful things like jewelry, pictures, statues, musical instruments, story telling and so on.

Music, which is not emphasized today in schools, has the power to bring together many aspects of life because it corresponds to the actual human being – it speaks to the body with rhythm, to the emotions with the feelings coming from harmony and melody, and to the mind with its mathematical foundation (acoustics, the physics of sound).

I have a background in music – I taught junior high and high school music in public schools around the Boston area for quite a few years after graduating from Boston University. Leaving teaching I moved to

New York and concentrated on publishing. The actual name of the company is Carousel-Music.com. It started as a help to people wanting to play an instrument, so I created the first laminated charts with chords for the guitar and chords for piano, so that beginners could start playing tunes pretty quickly.  That lead to probably the largest assortment of music charts in the world. Also the company was the  first to publish Mozart’s musical dice game for composing music, Musikalisches Würfelspiel K.516f, The Mozart Melody Dicer. And from time to time, to keep me in touch with what is going on with kids  today, I started to give piano lessons.

The more I listened to my students talk, I realized how each subject they learned was in its own little world unconnected to the other subjects. I guess this piecemeal approach to learning is carried over  from Henry Ford’s assembly line for making cars. It worked so well for the automotive industry that  this concept seeped into education as well as into our health care. Only recently have we begun to go  towards a more holistic approach to learning, an approach that is closer to that of these ancient  civilizations: Egypt, Sumer/Babylon, China, India and Greece.

So the idea for “World In Tune” finally emerged. “WIT” was conceived for music teachers who were  asked to integrate their subject with the other subjects in the school curriculum – English, History and  Math – but needed background material that could help them. Because of its global approach, it was of  interest to the general public and, to our surprise, high school students. By the way, the title “World In  Tune” comes from that rare “Eureka!” moment of discovery when everything is in tune.

To develop this program, I needed a global perspective on many subjects – where could I find someone who had this together? I certainly didn’t, but one of my professors at BU had this kind of universal knowledge and I got permission from his wife to use some of his writings. Let me just take a moment  to tell you about this professor. He taught comparative arts at BU. He was also a writer, editor and  translator for various publishing firms and had a knowledge of at least a dozen languages. I think with  the exception of Latin, Greek and German, he learned many of the languages before traveling to study  in various countries. His extensive travel and study were possible because he was the recipient awarded more Fulbright scholarships than anyone in their history.

If you asked Dr. Wager a question he would always start with “I don’t know much about that”, and an hour later he would still be talking. A group of us students, enrolled in a doctoral program at the University of Durham in England, studied with him privately. And I have to say in the two years we

studied together, I never knew him to be unable to get to the core of a question, give it background and present a broader framework than the question you had asked. And with all this background he was always happy to share it with us – such a generous, humble man exchanging his knowledge with his students. A real teacher.

Well anyway, a lot of the book World In Tune: Music in the Ancient World consists of Dr. Wager’s writings on the places, times and output of these various civilizations, giving the reader a broader view  of what was happening back then. Along the way, “World In Tune” tries to imply to kids that so much  that constitutes our lives today, so much that we take for granted, was the work of some person in the  past, for the most part not known; and informs kids that people living in ancient times had the same  brain functions as we do today. Back then, they weren’t savages. You don’t construct a pyramid which  has lasted between 4000 to 5000 years without some real know-how. And best of all, these ancient  people are the ancestors of kids today. I hope “World In Tune” makes them begin to realize that they  have a long, proud lineage of value and achievement which we hope they will carry on.

Ksenia Sobchak enjoys blogging on fashion, style, lifestyle, love and CBD areas. Prior to becoming a blogger, Ksenia worked for a renowned fashion brand. Ksenia is a contributing author to leading fashion, lifestyle and CBD magazines and blogs. You can bump into Ksenia at her favourite cafe in South Kensington where she has written most blogs. Ksenia is a staunch advocate of CBD and its benefits to people. Ksenia is also on the panel of CBD reviewers at CBD Life Mag and Chill Hempire. Her favourite form of CBD are CBD gummies and CBD tinctures. Ksenia is a regular contributor at leading fashion, lifestyle as well as CBD magazines and blogs.